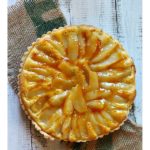 This is a recipe for a French Pear Tart Bourdaloue. Add some apricot rum glaze for a finishing touch of color and pure delightful flavor. Impress with this beautiful dessert.

If you’re a regular reader you know that in September, I graduated from Culinary School.

A good part of that schooling included time in the Pastry Kitchen, learning classic French Baking Techniques…and learning from one of the best pastry chefs in Denver, Jenna DiLullo. Invaluable training for me the anti-baker.

I’m totally amazed at the skills I’ve learned. All of which led me to make this French Pear Tart at home and with confidence. This was my second tart attempt. A Fresh Peach Curd Tart was my first dessert project. Additionally, a Fresh Tomato Tart with Gruyere was my savory project.

This is a classic French pastry created by famed patissier Paul Coquelin of La Patisserie Bourdaloue in Paris.

It’s a pear tart with frangipane (almond cream, or an almond based pastry cream). Certain desserts stand the test of time and this is one of those classics. I recently made it for the first time and served it to dinner guests. It’s a rewarding tart to make and impressive for entertaining. And did I mention divine with flavor?

For this recipe, you can use a tart pan that varies in size between 9 an 11 inches. I used a 9-inch tart pan and had Frangipane left over. The amount of pears worked fine and doesn’t need to be adjusted. The baking temperature and time for each size tart pan should remain the same.

For this recipe, you’ll use a Pate Sucree shell instead of a regular Pate Brisee tart crust. Pate Sucree is a sweet pie crust most commonly used for French fruit tarts. You can find a recipe for Pate Sucree at Saveur Magazine.

Don’t be intimidated by this fancy French name, here are a few things you need to know about this recipe:

How to use a vanilla bean: With a sharp knife, slice the vanilla bean in half length ways. With the back of a knife, scrape out the pulp. Easy and fabulous with flavor. If you can’t find vanilla bean, substitute with 1 teaspoon vanilla extract.

How to blind bake your crust: Blind baking means to pre-bake a pie shell crust before adding filling. Once you’ve formed the dough into the tart pan, simple cover it with a sheet of parchment paper. Using pie weights or dried beans, fill the covered shell to weight down the parchment paper so it’s touching the pie crust. This will keep the crust from bubbling up, which would make it impossible to fill with the frangipane.

What does docking mean: Docking is no more complicated than simply pricking the dough with a fork. Several times on the bottom and on the sides.

I strongly suggest that you make the Apricot Rum Glaze to finish the tart. It adds a beautiful golden hue to the finished product and another layer of great flavor.

I hope you give this French Pear Tart recipe a try. And if you do, please come back and let me know how you liked it and give the recipe a star rating.

Your feedback is valuable to me for developing future recipes. And if you have a favorite pear tart or pie recipe, let me know, I’d love to give it a try.

Want to try your hand at another classic French dessert? You won’t want to miss this recipe for French Butter Cake Madeleines

A beautiful work of art, this French pear tart with Frangipane is an elegant pear dessert.

You may make a caramel sauce to accompany the Pear Tart Bordaloue by reducing the liquid in which the pears were cooked to a caramel. Then add heavy cream.