This is a recipe for pan seared bison strip steaks on a bed of red and yellow bell peppers in a grainy mustard sauce.  Bison New York Strip Steaks are easy to cook, and full of flavor, flavor, flavor.

We’ve had beautiful weather in Denver, warm and perfect for hanging out on the deck drinking fiery Mexican Micheladas with steaks searing on a hot grill.  This Buffalo Bill Steak combines Bison New York Strip Steaks resting on a bed of sautéed red and orange bell peppers and onions and seasoned with salt and pepper and zesty grained mustard. Mouthwateringly delicious.

Keep in mind, bison contains less fat than regular beef, requires less cooking time, and will be dry if over-cooked. If you’re interested in learning more about the management of our American Buffalo and more recipes, visit the National Bison Association website. It’s a great resource for nutrition, cooking tips and more.

Of course these bison strip steaks will cook beautifully on an outdoor grill. Just brush them with olive oil before placing them on the hot grates.

Buffalo meat is lower in fat and cholesterol than beef. 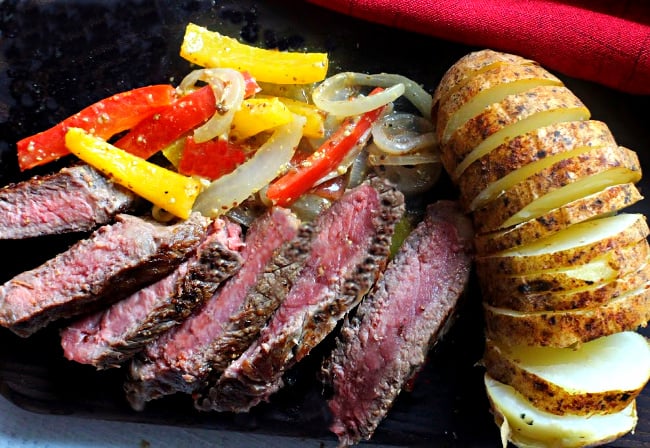 Cooking Bell Peppers and Onions in a Fry Pan

I’m going to sound like a broken record, but knife skills are very important skills for anyone who loves to cook. Being mindful when slicing vegetables is important for two reasons. Cutting uniform slices and shapes are important to the cooking process. Pieces of food that are cut into the same size and shape will cook uniformly resulting in an overall enhanced flavor and texture experience. Not to mention a more visually appealing end result.

Learn how to hold a knife and practice, practice, practice. Tip from Culinary School: Always keep the hand that’s gripping the knife dry. A wet hand could cause slips resulting in nicks or worse a nasty slice on your hand.

Once you’ve sliced your bell peppers and onions. All you need is a fry pan that’s been heated over medium high heat and some hot oil. Don’t add the oil until the pan is hot and wait for the oil to shimmer before adding the sliced vegetables. Add the peppers and onions and turn heat down to medium. Saute, shaking the pan frequently until the vegetables start to brown.

In the meantime, mix course grain mustard with water. Add the mustard mixture to the vegetables and cook until the moisture is mostly evaporated. End result? An exciting flavored base of colorful vegetables to enjoy with the bison strip steaks. Upon first bite of the steak and pepper combination, Hubs exclaimed “this is a 10”.

I hope you give this bison New York Strip Steak recipe a try. And if you do, come back ad give the recipe a star rating. And leave a comment about your experience with the recipe.

And if you have a favorite buffalo steak recipe, please let me know, I’d love to give it a try.

Want to hone your pan seared steak skills? Take a look at this Pan-seared Filet Mignon with Lobster Avocado Salsa Recipe. It’s a fool proof method that is finished in the oven.

And if you’re still in the steak mood, you won’t want to miss recipe for New York Strip Steaks with Cognac Creamed Mushrooms. 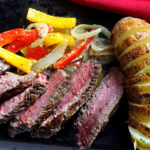 A perfect side dish for these steaks is another Western favorite, Coyote Corn. So delicious, they’ll be howling for more. Take a look.