Home > Appetizers and Beverages > How To Make Pickled Beets The Old-Fashioned Way, A Step by Step
Jump to Recipe Print Recipe

“You can pickle a beet, but you can’t beat a pickle” My Aunt used to say that all the time.

Pickling beets has officially become a tradition for friend Greg and me. This fall was our second annual project. Last year we pickled 25 pounds of organic Colorado grown beets.

This year we were so confident in our skills we purchased 50 pounds and went to work.

I have to admit, due to precision teamwork, doubling the amount of beets really didn’t take but 30 minutes longer. It’s a five and a half hour project that produced almost 40 jars.

We pickled beets on a Sunday afternoon smack dab in the middle of a Bronco home game, complete with fighter jets roaring over the house for the National Anthem stadium flyover.

Cooked beets ready to be peeled and cubed

Greg was even suffering from complications from wisdom teeth extractions. A couple of pain killers for him, a couple of glasses of wine for me and and we were good to go.

Aside from me running outside to see the fighter jets that were circling for the stadium flyover, a few minor distractions couldn’t stop us.

Peeling and cubing the beets

We were very pleased with the outcome of flavors from last year’s recipe, but did tweak a couple of things this year.

One of Greg’s relatives suggested that instead of pouring the colorful liquid from boiled beets down the drain, to use it for the water in our pickling brine. We did and both agreed it made for a more flavorful brine.

And as always, good quality products such as organic sugar and quality pickling spice from our local spice shop made for a delicious end product.

Pickling ingredients before vinegar is added.

It’s interesting, before making my own, I used to buy a brand from a small Colorado company that used locally grown beets and thought they were the best!

Upon conducting a taste test of ours vs. theirs, I was stunned to find that the brand I used to love fell short on the flavor scale compared to our home made.

I’m impressed In other words…Greg and my pickled beets kick butt with an end result of a great sweet and tangy combination.  I also like that our beets have a slight crunch as opposed to being mushy.

Jars of pickled beets cooling and waiting to seal.

Let’s take a look. This is a basic old fashioned pickled beets recipe from the  Ball Blue Book Guide To Preserving … with some tweaks from two family recipes.

For your convenience, I’ve included an affiliate link to the book about canning.

Recipe For How To Make Pickled Beets

I hope you give this Pickled Beets recipe and try and if you do, please come back and give the recipe a star rating and leave a comment about your experience with the recipe.

And if you have a favorite pickled vegetable recipe, let me know, I’d love to give it a try.

And, don’t forget to visit my Best Spicy Pickles Made From Store Bought Dills. It’s very popular and very easy.

And if you’re a beet fan like we are, you’ll want to take a look at these recipes: 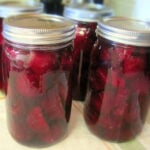 A step by step tutorial to make your own old fashioned pickled beets at home.

This recipe makes around 6 pints. I like to use wide mouth jars.

How to Make Pickled Beets …It’s What’s for a Project.