I grew up on a farm in the middle of Kansas where the closest town of any size was Hutchinson. With a population of about 40,000 and known to locals as Hutch, it’s also referred to as the Salt City because it sits on miles of salt mines. It hosts the Kansas State Fair and the Men’s National Junior College Basketball Tournament. When I was growing up there, we bought our groceries and shopped for clothes from stores that were owned by people who lived in Hutchinson and we relied on The Hutchinson News-Herald to keep us connected with neighboring communities of small farming towns.

For longer than I can remember, The Hutchinson News has been faithful about providing some sort of regularly published readership submitted  recipe roundup.  In recent years it’s been an insert in the newspaper, and in earlier years their spiral-bound cookbooks.  If you’re a collector of rare vintage cookbooks like I am, I’ve included an affiliate link to these cookbooks.

The recipes in these Hutchinson News Cookbooks were a compilation from ones published each day  in the News-Herald ‘s Favorite Recipe column. The daily women’s page feature was started as an experiment in 1948. Good old fashioned farm country cooking recipe.

Each publication was overseen and recipes were judged by local business women who held titles such as  Home Service Director with the local gas company,  Home Economist with the County Extension Office, or a Home Editor with the newspaper. I look forward to sharing several of the recipes from these books, recipes from a simpler time, recipes from the heartland where ingredients were few and instructions you won’t find fancy cooking terms like chiffonade, saute or macerate.

I have three of these old cookbooks from my mom’s collection. The recipe I’m going to talk about today is one I found in the book with recipes collected from 1952 – 1955. The oldest edition I have was published in 1949 and as the cover indicates, sold for 60 cents. Inside it states that  it’s the 2nd edition in the series.

With all that said … we like anything pickled, so when I spotted this recipe for pickled pineapple I had to give it a try. Incredibly easy, it simply states “serve with poultry, meat or fish“. Following instructions, a week later I had a tangy sweet and sour topping of easy pickled pineapple for my meat course.

I chose pork tenderloin to slice into 1-2  inch medallions. Using my cast iron skillet, I seared the meat well and then sautéed until just pink inside. While the meat was cooking, I fine chopped and de-flamed some onion to sprinkle on the pork before topping with the pickled fruit. I learned the de-flaming technique from Rick Bayless. Simply chop onion, place in a colander and then submerge the colander in a bowl of cold water to cover the onion. Let sit for a few minutes and drain. This technique takes that heat out of the onion resulting in a milder flavor. The sweet and sour pineapple was a great topping for the pork and the onion added a dimension and crunch. 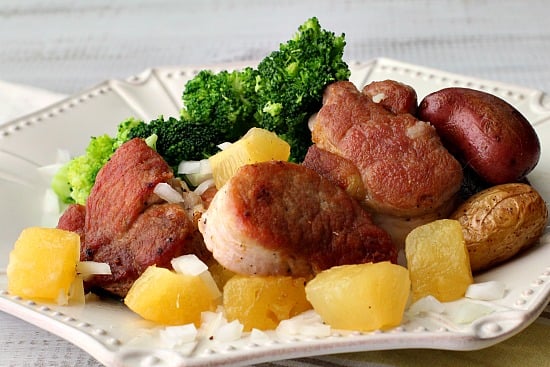 Here’s the recipe as printed in the cookbook.

Out of curiosity I Googled Louise Dick. She was born in 1913 and died in 1967.  She is buried in the Mount Hope Cemetery.

We love to pickle here on the Ranch, and so do my readers. My most popular post is:

How to Make Pickle Beets