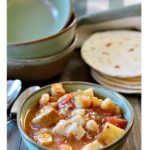 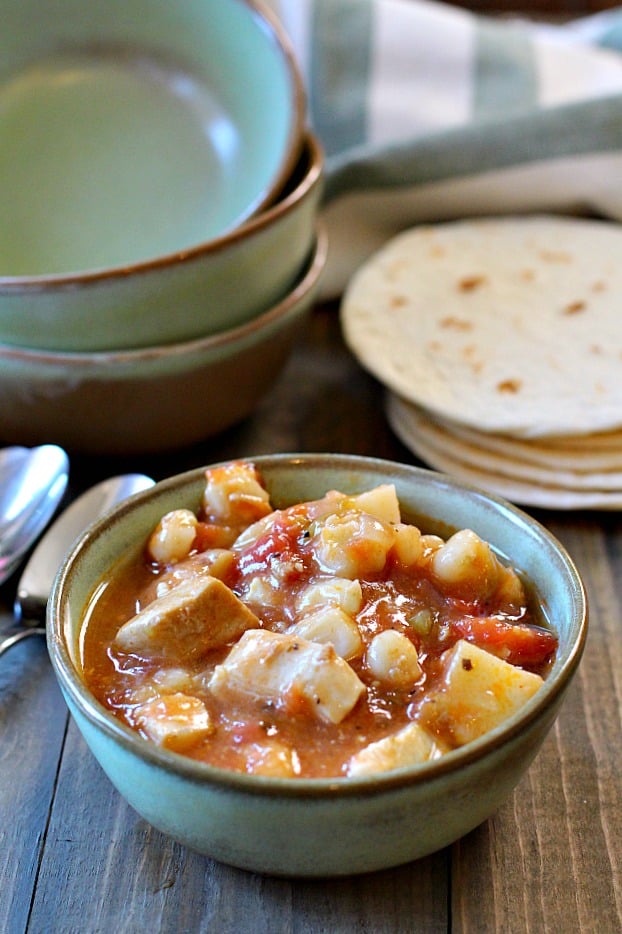 Is there anything better than having a huge pot of stew on the stove top, simmering, steeping, and filling the house with the aromas of comfort? And especially if those aromas include chile peppers and Southwestern spices.

A big pot of stew is a perfect project for a Sunday afternoon…not to mention the rewards of leftovers to start the week or stew-filled containers in the freezer for quick weeknight dinners.

This is a variation, and a much heartier version, of my Hatch Green Chili Colorado Style recipe. There are plenty of hearty additions to that traditional green chili to make this a filling comfort food stew.

A subtle yet significant difference in this stew is that I used a pork loin roast instead of a pork shoulder roast which I used in my Hatch Green Chili. But why? What’s the difference between pork shoulder and pork loin?

Which is better, Pork Shoulder vs. Pork Loin Roast?

They’re both delicious of course, but each will benefit from using different cooking methods

I’ve used a pork loin roast for this green chile stew recipe. It’s juicy, tender and has much less fat and connective tissue than a pork shoulder butt roast. It’s evenly shaped which means that it’s easier to cut into bite sized pieces before cooking.

A pork shoulder Butt roast can weigh up to eight pounds and is usually sold bone in. To insure fall apart and tender meat, a pork shoulder is cooked low and slow. It’s cut, or shredded, after it’s cooked and is great for pulled pork sandwiches or soups and stews. Shoulder cuts are located close to the front of the pig and are divided into two categories. The top shoulder is called the “Boston butt,” while a cut from the lower shoulder and leg is called an “arm picnic” shoulder.

What Kind Of Chile Peppers to Use for Green Chile Stew:

This is a much heartier version of my Hatch Green Chili Colorado Style recipe brimming with Hatch Chile Peppers. And I’ve used a different variety of chile pepper.

For this recipe I’ve used local produce, the Pueblo Chile which is grown in the Southern part of Colorado.Its pungency ranges between 5,000 and 20,000 Scoville Heat Units, the measurement method used to rank chile heat. Pueblo chilies are comparable to moderate jalapeno peppers, and are usually a little warmer than cayenne peppers.

If you’re new to cooking with chile peppers, and concerned about heat, start with a milder variety, like mild Hatch Chile or Anaheim. You can roast fresh chiles over the open flame your gas stove top, or broiled in the oven. Turn peppers frequently for both methods in order to create charred skin on all sides…or you can purchase cooked chile peppers in the grocery store either in the freezer section or canned on the Mexican food aisle.

I keep a stockpile of fresh roasted chile peppers in the freezer. They freeze like a charm and can be used all Winter long to keep you warm and cozy. 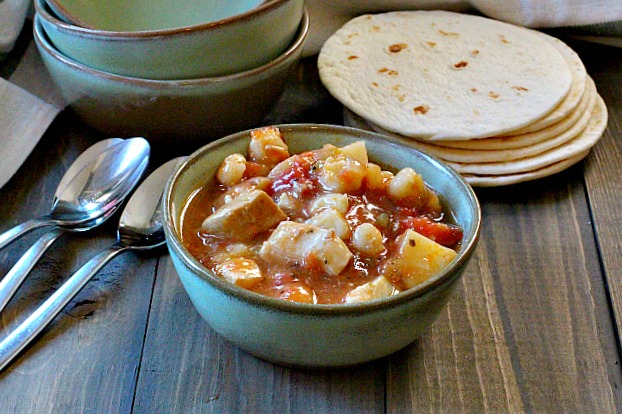 This is an easy, straight forward comfort food recipe…

This recipe calls for adding Homemade Roasted Tomatillo Salsa.  But you can use your favorite jarred salsa verde from the grocery store.

I hope you give this Pork Green Chili Stew recipe a try. And if you do, please come back and let me know how you liked it and give the recipe a star rating.

Your feedback is valuable to me for developing future recipes. And if you have a favorite green chile stew recipe, let me know, I’d love to give it a try. 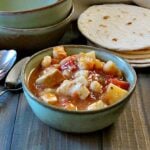 This makes a very large batch of stew. Perfect for feeding a crowd or for a Sunday Afternoon Football party. This recipe freezes well.