Looking for a Thanksgiving Cocktail recipe to serve your holiday guests? One that will compliment that Thanksgiving Turkey? How about a Pumpkin Pie Martini.

Last week we had a Falltini-themed open house at our office and invited all of our clients to celebrate a successful year of real estate.

This Pumpkin Pie Martini is one of the flavored martinis that our bartender was shaking up. It was quite popular, everyone was raving, asking how to make it, and chattering about plans to serve it on Thanksgiving.

It’s a delicious combination of thick and creamy pumpkin pie spiced creme liqueur and vanilla vodka. Topped with a squirt of Reddi-wip you’re reddi to celebrate the turkey holiday.

Even I, the non foo-foo drinker, who prefers a simple glass of red wine, went wild over this drink. A cinnamon stick makes a clever garnish for this martini, or perhaps cinnamon sugar around the rim of the glass would dress it up even more.

I also thought this liqueur was delicious served on the rocks and it actually seemed pretty good swigged straight from the bottle. (Just kidding on that one…kinda.)

Anyway, when you see Fulton’s Harvest Pumpkin Pie Cream Liqueur in your liquor store, pick up a bottle. Its perfect for a Thanksgiving cocktail recipe.

Fulton’s is a limited-edition liqueur available only from September to November. The cream liqueur tells its tale simply by looking at its name.  It is lush, creamy and reminiscent of homemade pumpkin pie complete with the flavors rich with vanilla, brown sugar and spices.

My favorite part is that it’s not overly sweet.

The bartender wasn’t measuring and was somewhat vague on the amounts, so we took one for the team and played America’s Test Kitchen here at home and came up with this combination.

I hope you give this Pumpkin Pie Martini recipe a try. And if you do, please come back and let me know how you liked it and give the recipe a star rating.

Your feedback is valuable to me for developing future recipes. And if you have a favorite Fall cocktail recipe, let me know, I’d love to give it a try.

If you’re crazy for all things pumpkin this time of year, don’t miss my lineup of pumpkin flavored treats: 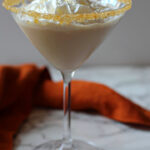 To coat the rim of the glass with sugar, or cinnamon sugar: Place about 1/2 cup raw sugar on a plate.  Sprinkle on 1 teaspoon cinnamon and mix. Make sure the sugar mixture doesn’t spread out. Shake the plate so it makes a solid dipping platform. On another plate, add water. Turn the glass upside down in the water and then place it in the sugar mixture. If it doesn’t coat evenly, just shake the plate again, rotate glass and dip again.