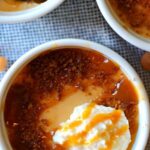 Homemade Butterscotch Pudding Recipe. A very special recipe using heavy cream, brown sugar, butterscotch chips, and a splash of Scotch Whisky. Luxurious, velvety rich and an unforgettable dessert. Perfect for your next dinner party, as it can be made well ahead of time.

What is your favorite flavor of Life Saver candy? Cherry? Pineapple? Mine was always Butter Rum. Couldn’t get enough of those little candies when I was a kid. And did you know that Pep-o-Mint was their original flavor?

So what does this have to do with pudding? The first time I made this homemade butterscotch pudding it took me back to those Life Saver candies. The flavor reminded me very much of that Butter Rum candy.

I’ve been known to throw a dinner party or two …. and more times than not, my choice for dessert is this old-fashioned show-stopper, homemade butterscotch pudding. The first time I made this recipe it was dessert for my leg of lamb recipe = perfect.

Why? It seems to go with any type of meal, and it just flat out wins the hearts of everyone. Plus this can be made well ahead of time, actually a full day ahead, leaving time for other tasks the day of your event.

Butterscotch is made stovetop by combining butter, salt and dark brown sugar and cooking it until it just starts to smoke and becomes caramelized. Cooking sugar can be a bit fussy and a little unnerving. It takes practice.

This recipe removes that nervous factor by using butterscotch chips (Nestle calls them morsels) that are melted into heavy cream. Brown sugar is most certainly a part of this recipe but it’s simply dissolved in water stovetop. And did I mention there’s a splash of Scotch involved?

Here’s Why This Butterscotch Pudding Recipe Is So Special

I remember the first time I ever made butterscotch pudding from scratch. I simply could-not believe my tastebuds. The texture was rich, creamy, eggy, and oh so custard-y. And the flavor simply crazy divine.

Making pudding from scratch is a totally different experience from the boxed pudding we get at the store. After you make this homemade butterscotch pudding you’ll question whether it’s even the same product as boxed pudding.

How to Make Butterscotch Pudding From Scratch

I’m not going to claim that this recipe is super easy to make, but it’s not all that hard either. Once you start the recipe, its hands on, so you’ll need to pay attention until the process is completed.

We always strained any type of sauce in Culinary School. It was routine practice. In this case here’s the reason. Straining the pudding removes any bits of the egg that may not have completely emulsified in the mixing process. This will eliminate the possibility of lumps in the pudding. Perfect!

I hope you give this butterscotch pudding recipe a try. And if you do, please come back and give the recipe a star rating. And leave a comment about your experience with the recipe.

And if you have a favorite homemade pudding recipe, let me know, I’d love to give it a try.

And if you’re looking for even more dessert recipe ideas, don’t miss my Dessert Category. You’ll find lots of luscious treats, including the most popular dessert recipe on my site, French Pear Tart Bourdaloue with Apricot Rum Glaze. 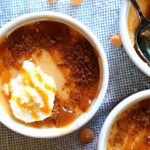