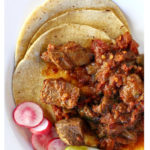 This Mexican Pot Roast Recipe is easy and full of earthy flavors. Your family will love this “just right spicy” version. Take that Sunday Pot Roast South of The Border.

Before we get to this Mexican Pot Roast recipe, let’s talk about a couple of Mexican food staples. Have you ever made a Mexican red sauce using guajillo peppers?

A Mexican cuisine staple, the guajillo pepper has gained popularity in my kitchen over the years. This sweet and smoky pepper, the “Holy Trinity” of Mexican chilies can be used for a variety of sauces in Mexican cuisine.

You can find guajillos in the Mexican aisle of the grocery store, dried and hanging in clear plastic bags. All you need to do is soak them and let your food processor do the rest. The result is a beautiful, thick, earthy red gravy. You’ll find yourself grabbing for a bag on a regular basis.

And what’s up with sliced radishes on Mexican food? Sliced radishes are used as a garnish on dishes such as enchiladas, posole. They are visually striking and offer a bright, fresh and slightly bitter contrast to the richness of any Mexican sauce.

I’ve watched some people push them aside, but you really should try them with a bite of your favorite Mexican dish. No? Then just eat them separately with a sprinkle of fresh lime juice and a dash of salt.

How to Make Mexican Pot Roast

Now that we’ve got all of that out of the way, let’s make this Mexican pot roast recipe.

The aromas that fill your house will intoxicate. To serve just slice some radishes, cut up some limes and warm those corn tortillas. You’re ready for a Mexican feast. Enjoy!

I hope you give this Mexican Pot Roast recipe a try, and if you do, please come back and give the recipe a star rating and leave a comment about your experience.

And if you have a favorite version of Mexican Pot Roast, let me know, I’d love to give it a try.

This Mexican Pot Roast Recipe is easy and full of earthy flavors. Your family will love this “just right spicy” version. Take that Sunday Pot Roast South of The Border.

Looking for a more traditional Beef Roast Recipe? How about my mom’s