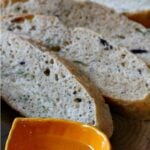 Rosemary Olive Bread. A beautiful outer crust and chewy on the inside. This is a recipe we made practically daily in Culinary School, a Rosemary bread recipe made salty with olives is one you’ll want to make over and over again.

I Thought I’d Never be Able to Say …

I’ve been on somewhat of a homemade bread making bender.

If you’ve been following along with my blog at all for the past nine years, you will have noticed, you’ll find my mom’s Banana Nut Bread,  but there’s never been a homemade yeast bread recipe posted and you’re probably very surprised about this development.

This Rosemary Bread Recipe has me hooked.

And I’ve more than once stated my “dough-a-phobic” condition.  Culinary School has changed all of that. Spending plenty of time in the Pastry Kitchen with one of the best Pastry Chef’s in Denver, Jenna Dilullo is a guarantee for success.

That is if you have the will. And I do.

There’s certainly something extremely satisfying about creating a loaf of bread in your own kitchen. So satisfying, it becomes addictive.

Tips for making Bread at Home

Just like wine making, making bread is watching and nurturing a living thing to grow. Watching the yeast bloom, seeing the bread rise like magic and smelling the bread baking.

Learning about fermentation and proofing, watching the action happen. Converting starches into sugars… and it’s all actually easier than it seems. There’s nothing like it. It’s messy, it’s rewarding and you feel like an artisan.

I’ve kept the way I approach bread making in my own kitchen as the way I was taught at Culinary School.

That approach being using quality flours and measuring by weight instead of volume. Everything is measured to the gram. Owning a good quality digital scale is not optional.

Making bread is most certainly a labor of love. And if you need inspiration I urge you to watch Michael Pollan’s Netflix Documentary “Cooked”.

I liked it so much I’ve watched it twice. A four part series, he explores cooking through four natural elements – fire, water, air and earth. The bread baking part of the series is really good.

Bread Making as a Hobby

When you first started making loaves of bread didn’t you feel like it was the beginning of a hobby? Especially when you realize there are all types of flours available to tinker with.

I haven’t even scratched the surface with experimenting. The most exotic being 00 flour for pizza dough. I’d love for you to leave a comment about your favorite bread to make and favorite flour to work with.

I hope you give this rosemary olive bread a try and if you do, please come back and give the recipe a star rating a leave a message about your experience with the recipe.

And if you have a favorite homemade rosemary bread recipe, let me know, I’d love to give it a try. 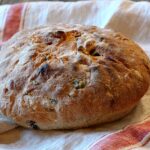 Rosemary Olive Bread. A beautiful outer crust and chewy on the inside. Salty with olives and beautifully flavored with Rosemary. One of our favorite homemade bread recipes.