Not a lot of desserts come out of this meat and potato kitchen here on the Ranch. But due to a planned 4th of July kabob-athon party that included two of my favorite six and eight year old boys, I thought it wise to have a kid type dessert on the menu.

I’ve had this recipe pinned to make for quite some time, compliments of Holly over at A Baker’s House. Have you ever paid her blog a visit? Holly lives right here in Denver and is a very confident baker. Great site that would behoove you to subscribe to. And thank you Holly for this recipe.

With my love for Mexican food, you bet I’ve had my share of bites of Churros. A fried dough pastry with cinnamon and sugar which is just a little too sweet for my taste. But take that flavor combination and add cream cheese and a shortcake crust and WOW. You’ve got a churros cheesecake dessert. And it brought back memories of all that cinnamon toast that I gobbled down as a kid.

I also made these in anticipation to our recent trip to the Steamboat Springs area. I thought I’d save out a couple of these for the road.

These were a big hit! The shortbread crust is a perfect to tame the sweetness of the other ingredients. They are creamy, super easy and super addictive.

I hope you give these Churros Cheesecake Bars a try and if you do, please come back and give the recipe a star rating. And leave a comment about your experience with this recipe.

And if you have a favorite churros cheesecake style recipe, let me know, I’d love to give it a try.

And if you’re looking for more Mexican dessert ideas, you won’t want to miss my Cream Cheese Flan Recipe. 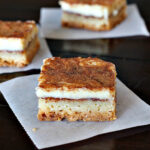 Looking for More Mexican themed dessert ideas?  How about this one: