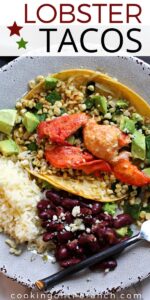 I have to admit, I’m not one that cooks lobster much. First of all, there’s this landlocked excuse that I use. Seafood is expensive and whole lobster tops the charts on the exorbitant $$$ side.

In culinary school one of the tasks that we had to complete was to place a live lobster on our cutting board and drive the point of a knife straight down through its skull. Hated it. But I guess I’d rather take that route than throw the poor things into boiling water.

I’ve broiled Lobster Tails and love them. So easy. So delicious. But still I wrestle with extracting that meat from the shell once it’s cooked. With that said, Whole Foods to the rescue.

Whole Foods is my preferred outlet for purchasing seafood. For several reasons, but the main one is simply that I trust their purchasing practices. I’m hardly ever, EVER disappointed in the quality.

They’ve been offering little packages of steamed chunk lobster meat. Could it get any more convenient than that? And that’s what I used for these lobster tacos. So easy.

If you can’t find these convenient tubs of chunk lobster, just steam or broil two lobster tails for these lobster tacos.

How To Make Lobster Tacos

First let me point out that these lobster tacos are creamy rich and delicious. With fresh seasonal ingredients, I was very proud of the end result. Let’s take a look.

What to Serve With Lobster Tacos

Simple. Just warm up your favorite can of beans. Whether they be black beans, red beans or chile beans. Just make sure to sprinkle them with Mexican Crumbling Cheese and chopped cilantro. Cotija is my choice.

And white rice. I like jasmine or basmati. Again, don’t forget that topping of Mexican cheese and chopped cilantro. And if you’re want to get adventurous, you can even chiffonade fresh basil leaves. Just stack about three fresh basil leaves on top of each other, roll them up starting at the stem end, working towards the tip of the leaf. Then slice the leaves into ribbons.

These lobster tacos were a true culinary treat. The sweet buttery lobster meat blended perfectly with the toasted fresh sweet corn. The earthy flavor and subtle heat from the roasted poblano pepper brought fiesta to the dish. And creamy chunks of avocado and the melted cheese added a silky component.

A squeeze of lime always brings a brightness of flavor to any meal.

I hope you give these lobster tacos a try and if you do, please come back and give the recipe a star rating and leave a comment about your experience with the recipe.

And if you have a favorite Lobster Taco recipe, let me know, I’d love to give it a try.

And if you’re interested in more, don’t miss my Tacos Category, you’ll find a ton of tasty recipes. The most popular being my recipe for Fried Tacos.

A squeeze of lime juice over the finished taco adds important flavor and brightness. Don’t skip this step.

If you don’t want to mess with roasting poblanos, and if you’re looking for a little more heat. Just seed and devein jalapeno peppers, chop and cook them with the corn.

DON’T WANT TO MISS A THING? 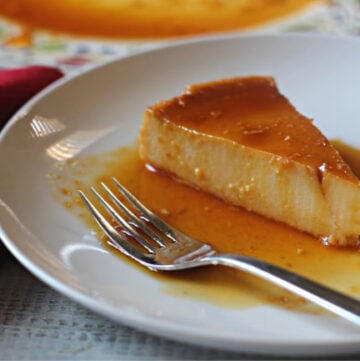