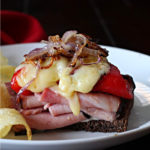 Ham and Manchego Sandwich. A recipe for a quick, flavorful gourmet sandwich that’s built with ham, roasted red pepper and caramelized onion. Topped with Manchego cheese and toasted, you’ve got a unique sandwich full of flavor.

I call it “The Spaniard” even though the only thing Spanish about the final version of this sandwich is the Manchego Cheese. If you’re looking for new ham and cheese sandwich ideas, this is a really flavorful option.

I’ve made this Ham and Manchego sandwich many times. It’s a unique sandwich that I fell in love with at a deli and decided to make it at home soon after.

I’ve even prepared and toasted this sandwich then hauled it on picnics and bird watching trips – it’s just that adored. Warm or cold, we love this combo.

What is Manchego Cheese?

Manchego cheese is from the La Mancha region of Spain and made from the milk of the Manchega Sheep. It’s a semi-hard cheese recognized by it’s trademark herringbone rind, which is not edible. It has somewhat of a sweet and nutty flavor and its buttery in texture.

It’s a clever cheese to place on an appetizer cheese board when served along side Membrillo.

Membrillo is a popular paste made from quince. It’s sweet, it looks impressive and it’s sweet flavor is a beautiful regional compliment to Manchego Cheese.

You can see it in the photo below. It’s on the left side of the cheese plate, the orange colored slice on top of the white cheese.

How to make this ham and manchego sandwich.

You can also use Jamon Serrano Ham, which is a dry cured Spanish ham

Starting with the ham, layer ingredients on one slice of bread that’s been slathered with mayo.

Start with the ham, add roasted red bell pepper and with the Manchego Cheese ending up on top. Place the two sandwich halves on a baking sheet and broil until cheese is bubbly and just starting to brown.  Remove from oven, top with caramelized onions and remaining slice of bread, press down a bit on the top to press everything together and dig in.

The sandwich filling ingredients will make 2-3 sandwiches, depending on how high you pile things up.

I like to serve a lot of simple garden salads with my meals.  Makes me feel healthy.

If you’re looking to become a salad expert, you don’t want to miss my post for 9 Secrets To A Remarkable Tossed Salad.  Some good tips from Culinary School in this one.

The ingredients and the flavors they create in this sandwich are made for each other. Salty ham, sweet and creamy cheese, smoky roasted bell peppers and savory caramelized onion.

The pumpernickel bread add just enough pizzaz to bring it all together.

I hope you give this Spanish Ham and Manchego Sandwich a try. And if you do, please come back and give the recipe a star rating. And leave a comment about your experience with the sandwich.

And if you have a favorite recipe using Manchego cheese, let me know, I’d love to give it a try. 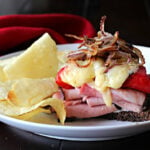 The ingredients and the flavors they create in this sandwich are made for each other. Salty ham, sweet and creamy cheese, smoky roasted bell peppers and savory caramelized onion. The pumpernickel bread add just enough pizzaz to bring it all together.

You can roast red bell peppers over an open flame of a gas stove. Turning until peppers are charred. Place them under a towel for about 10 minutes and then removed skin.

Easier yet, purchase two roasted red bell peppers from the olive bar at the grocery store, or in jars in the pickle section.