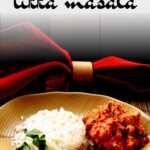 Chicken Tikka Masala Recipe. An easy and manageable recipe. Chicken is marinated in yogurt and spices and then served in a tomato cream sauce. The end result is the most flavor packed sauce ever and beautifully tender chicken.

…without the tikka or the tandoori.

I’ve recently signed up for emails from America’s Test Kitchen and so far I’m impressed and engaged with the content. The latest included a clip from a television segment featuring an easy Chicken Tikka Masala recipe. I felt the excitement and adventure of a challenge since I’ve never had Tikka Masala and couldn’t resist the project.

ATK tells us that Tikka Masala is the most popular dish ordered in Indian Restaurants and assures us that after testing many recipes, this Test Kitchen version will yield tender chunks of chicken in a flavorful aroma of seasonings without skewering and can be prepared in our American kitchens without the need of a tandoori oven or vessel.

Using a mixture of cumin, ground coriander, cayenne and salt…

Sprinkle over both sides of  boneless, skinless chicken breasts. Cover with plastic wrap and refrigerate for 30 minutes. ATK assures us that the addition of salt and plastic wrap will vibrantly flavor the chicken in this short time.

Mix together plain yogurt, chopped garlic, grated ginger and some vegetable oil. Stir together and let rest so that the flavors can marry while the chicken is flavoring in the refrigerator.

At the end of 30 minutes, remove chicken from refrigerator and slather generously with the yogurt mixture.

Add some crushed tomatoes and continue to simmer on low. Whisk in some cream and keep warm until you add the chicken.

Broil the slathered chicken breasts about six minutes per side, until thermometer reads 160 degrees. Transfer to a cutting board and let rest for five minutes and then chop into bite sized pieces. Stir the chicken into the tomato sauce and remove from heat immediately so that chicken will not cook any further. Serve alongside basmati rice.

I hope you give this recipe for Chicken Tikka Masala a try, and if you do, please come back and give the recipe a star rating. And leave a comment about the experience you had with the recipe.

And if you have an easy Indian chicken recipe, let me know, I’d  love to give it a try.

This dish is best when prepared with whole-milk yogurt, but low-fat yogurt can be substituted. For a spicier dish, do not remove the ribs and seeds from the chile. If you prefer, substitute 2 teaspoons ground coriander, 1/4 teaspoon ground cardamom, 1/4 teaspoon ground cinnamon, and 1/2 teaspoon ground black pepper for the garam masala. The sauce can be made ahead, refrigerated for up to 4 days in an airtight container, and gently reheated before adding the hot chicken. Serve with basmati rice.