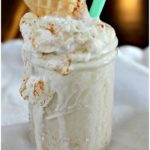 Brown Sugar Banana Milkshake Recipe. Shake em up a bit with this caramelized bananas and brown sugar. Easy to make and big on flavor. Your kids, big and small will go crazy over this.

It’s been almost two months since I told you that 2017 would be my year for desserts. Chocolate Ricotta Custard made it’s debut in January – check. It received good reviews from all who consumed.

I don’t know exactly why it happened, but for weeks I’ve been craving a milkshake, like crazy. An indulgent treat. Ice cream is my favorite dessert and milkshakes are everything ice cream ever wanted to be. And more.

It’s been at least two decades that I deliberately walked into an ice cream shop to order a milkshake. I was once obsessed with Dolly Madison Banana Milkshakes. At least twice a week I found myself at their counter. But then  the unthinkable happened, I scream, you scream, we all screamed when the Dolly Madison closed their stores. My banana milkshake connection – gone!

Armed with the eyeopening revelation to make my own banana milkshake at home, I was hesitant. You know what I mean, when you love something so much you don’t want to risk the disappointment of making an inferior version?

So I decided to create this Brown Sugar Banana version.

I hope you give this caramelized banana milkshake a try, and if you do, please come back and give the recipe a star rating. And if you have a favorite homemade banana milkshake recipe, let me know I’d love to give it a try.

And if you love ice cream as much as I do, check these out:

And if you’re looking for more dessert ideas, check out my Dessert Category. You’ll find lots of great recipes to satisfy that sweet tooth. Including the most popular dessert recipe on my site for Churros Cheesecake Bars. 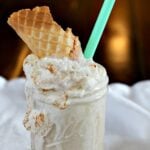 A wonderful combination of butter and brown sugar, mixed with bananas and vanilla ice cream.